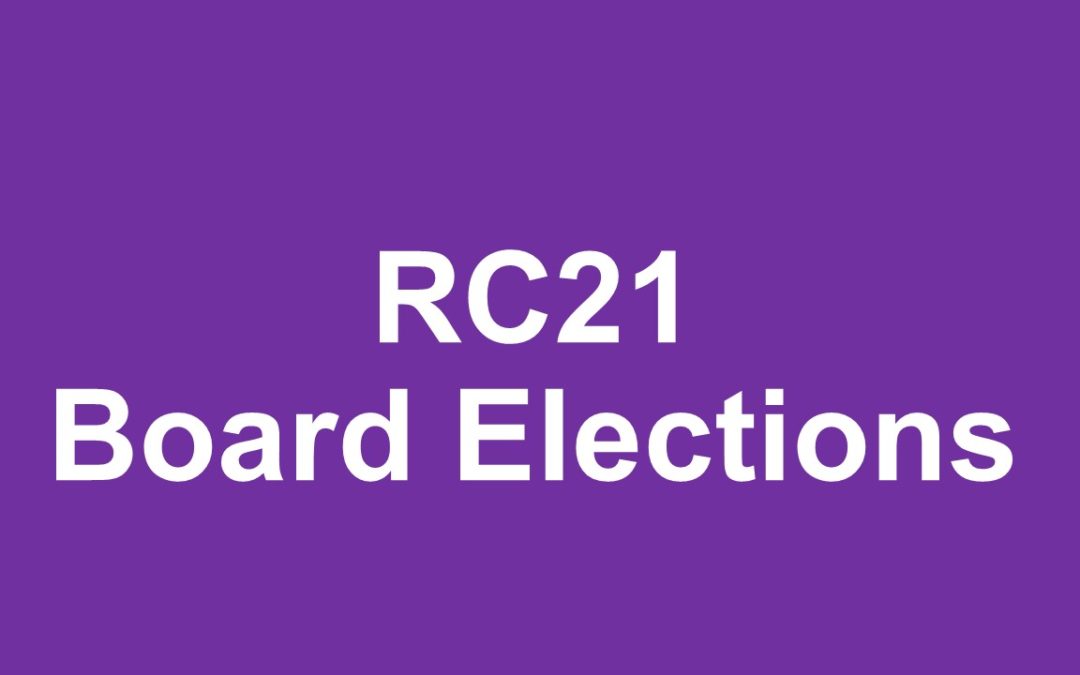 RC 21 is holding elections for three board seats. Here you can read the candidate statements and their CVs

I am Associate Professor in the Department of Urban and Regional Planning of the Norwegian University of Life Science, with a background in Urban and Environmental Sociology. Previously I was Marie Curie Fellow at the University of Vienna, Assistant Professor at the Polytechnic of Milan, Postdoctoral Fellow at the University of Toronto.
Urban comparative studies guide my research interest. My work has progressed around the core theme of urban inequality and focuses on processes of socio-spatial segregation; environmental policies and social vulnerability; urban social policies.
Currently, I am involved in three main research projects: The Erasmus Plus Strategic Partnership “ECASS: European Cities Against School Segregation” (Horizon 2020); the project “SENSUS: The social equality of Nature-based Solutions to urban heat stress”, Financed by Vienna Science and Technology Fund; the project “Social Challenges in European Cities” – financed by the Policy Department for Structural and Cohesion Policy, DG Internal Policies, European Parliament.
I collaborate regularly in international networks and conferences, and guest speak in seminar series, master courses and round table discussions in European institutions. See attached CV.

Activities within RC21. I have participated in the RC21 conferences since 2010, both through presenting papers and co-organizing/co-chairing workshops (in Leeds, 2017; in Toronto, 2018) aimed at advancing critical debates on production of urban inequalities and urban social policies in Europe. RC21 has offered me irreplaceable opportunities for critical reflections, theoretical advancements, and stimulating collaborations. In the RC21 international community of scholars I have found many of my intellectual and professional references, as well as many inspiring young scholars.
I strongly believe indeed that RC21 has had a strategic role in building a network of forward-thinking and critical urban scholars, across disciplinary and geographical boundaries and beyond ethnocentric approaches. In order to keep this going, I would like to contribute to RC21 activities by helping to define the organization’s agenda and activities for the next years; and supporting young scholars’ involvement with RC21.
At the same time, I also believe that RC21 has the potential today to serve as unique platform for international exchange, dialogue, and theoretical elaborations on unedited global (urban) challenges such as the climate crisis, and the economic and social crisis following the pandemic. Within this framework, I would like to contribute to RC21 activities through expanding the network in topical fields, such as with scholars working on climate change, housing and social policies, building bridges to other RCs of ISA. The ecological crisis and the possible transition present a profoundly diversified and complex challenge, that require interdisciplinary dialogue and collaboration at different territorial scales. Hopefully, my research experience of bridging between disciplines and countries as well as my international networks will provide a good background to further contribute to its current activities and future developments.

Professor Tetsuo Mizukami specialises in research on urban sociology and migration studies. He is currently a sociology professor and Dean of the College of Sociology at Rikkyo University (St.Paul’s University). It is the largest school of sociology in Japan. Professor Mizukami’s research focus is on empirical studies of ethnic communities in Australia and Japan. He is regularly organising international joint research on urban community studies in the region. He has been a convenor of the special sessions at several international forums. In the framework of the ISA the last one was a special session organised at the ISA Forum in Porte Alegre, Brazil (“Comparative Research in Transnational Migration” ). As a member of Research Committee 21, he has taken part for over a decade as a session organiser and presenter of the papers. When the RC21 held in World Congress in Tokyo for the first time in 2008, he was in the Conference management committee. Additionally, he was a person in charge of the Joint Session between RC 21 and Japan Association for Urban Sociology. He also served as an organiser for the deep inner-city tour of Tokyo. In recent years, he has overseen presentations and session organisers at IIS and East Asian Sociological Association. Since the beginning of the COVID-19 disaster in 2020, He has been conducting research projects in central Tokyo, investigating the impact of the Japan’s state of emergency on the ethnic community. He is keen to work on this Board and would like to contribute more to RC21 in the future. Professor Mizukami, in his presentation at the College of Sociology, Rikkyo University, that supported his nomination for the position to present a plan of activities for RC-21 in 2023-2025. The focus of Professor Mizukami’s plan is “Return to Normalcy in Working Together after Pandemic”. To organise the Conference for the Board of RC-21 at Tokyo again, such as Rikkyo University in 2023 (The topic and logistical details to be discussed and confirmed at the RC-21 Business meeting at the ISA World Congress in Australia). In the framework of this session to discuss joint publication projects with Professor Walter R. Allen, the editors of the Palgrave book series, “Neighborhoods, Communities and Urban Marginality.” To organise a special session for discussing a possibility for further cooperation of RC-21 with colleagues from other Research Streams during the forthcoming RC20 Regional Conference on Comparative Sociology.

Biography. I am a Full Professor in Urban Sociology at the University of Antwerp in Belgium and the chair of the interdisciplinary Antwerp Urban Studies Institute. I teach courses on urban studies, social inequality, poverty and diversity in cities and urban social work. My research interests include place-based forms of solidarity in diversity, the politics of urban development, local social innovation and welfare state restructuring, integrated neighbourhood development and civil society innovation. Although I am based in sociology, my work sits at the intersection of urban sociology, human geography and spatial planning. I hold a PhD in Sociology on globalization, state restructuring and local development from the University of Lancaster (UK) and have worked as a researcher in Oxford University and K.U.Leuven, Belgium. I have published my research in the following journals amongst others: International Journal of Urban and Regional Research, Urban Studies, European Urban and Regional Studies, Urban Geography, Ethnic and Racial Studies, Environment and Planning A and Territory, Governance and Politics.

Why am I applying? The importance and value of RC21 as a platform for urban studies and the building of an inclusive and supportive community of scholars cannot be underestimated. Organizing the RC21 conference in Antwerp has convinced me even more of the importance of investing time and resources in RC21 as an infrastructure for the urban studies community. The main reason why I am applying to become a member of the RC21 board is to contribute my time and resources to maintain and expand the association so that this community can thrive and keep on including new generations of urban studies scholars.

What I find important is to use the summer school, conferences and other activities to include new generations of urban scholars and urban scholars from places that are at present less connected to RC21. I also value interdisciplinarity and I believe that the field of urban studies derives part of its strength from its interdisciplinary nature. I think in particular that urban studies has a lot to learn from a sustained dialogue with urban history – something that we have been investing in in the Antwerp Urban Studies Institute – and with social policy – at the intersections with urban studies I have been working on for many years now.

I write to nominate myself to serve on the Board of RC21. I’m an urban sociologist trained in China, Japan, and the United States. Currently I’m an associate professor of sociology and global urban studies at Michigan State University. My work focuses on urban development and governance in China, India, and the United States. My most recent book is Governing the Urban in China and India: Land Grabs, Slum Clearance, and the War on Air Pollution (Princeton University Press, 2020). I’ve served on the editorial board of several leading journals in urban studies, such as Journal of Urban Affairs, City & Community, and International Journal of Urban and Regional Research. Currently I’m working on two new projects. The first examines how the Covid-19 pandemic is changing urban governance in trans-Atlantic cities and cities in China and India; the second investigates how rust-belt cities use culture for revitalization, with case studies including Harbin (China), Detroit, and Turin.
RC21 has been an integral part of my intellectual life. I’ve been attending the RC21 conferences since I was a graduate student back in the early 2000s. RC21 has broadened my intellectual horizon and professional network. By serving on the board, I hope to spotlight the new generation of scholarship on global urban comparisons and facilitate the conversation and exchange among urban scholars in Europe, United States, Asia and beyond.