Introductory comments by the RC21 President 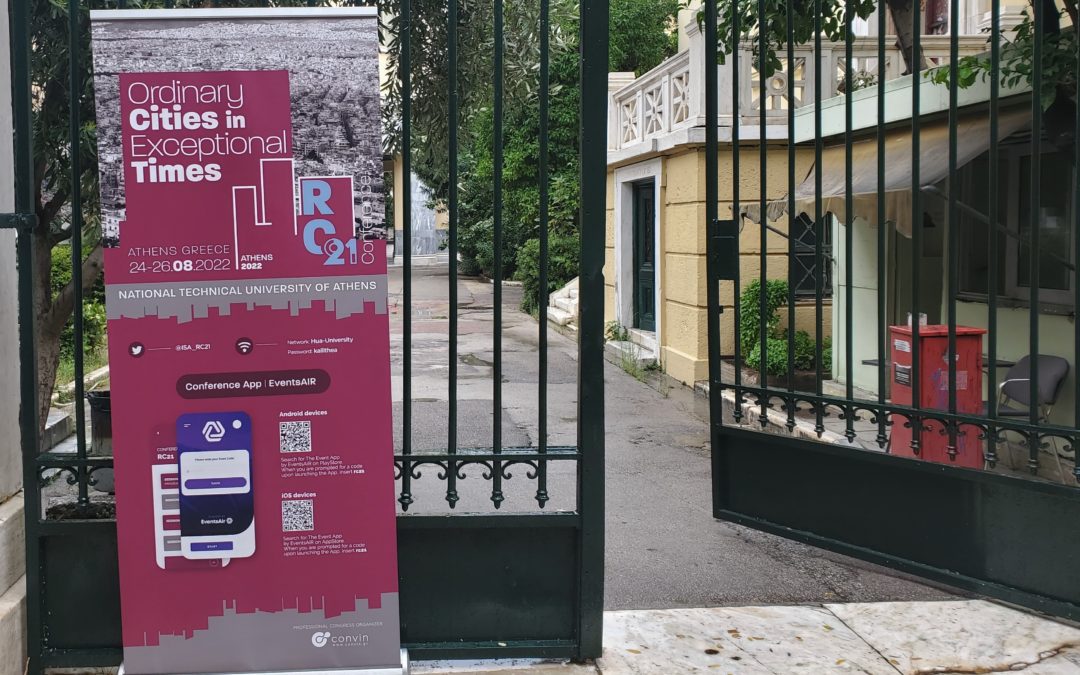 In her most recent novel, The Island of Missing Trees, the Turkish-British novelist Elif Shafak writes about love and grief, displacement and home and the Greek/Turkish conflict on Cyprus in the 1970s. One of the narrators is a tree. A fig tree, to be precise. This rather old fig tree reflects on those creatures doing one another so much harm, human beings. The tree remarks with a sigh something like that the people have no idea on how many buried bodies of the past, subjected to the violence of other people, they are tramping around as they go about fighting their next conflict. And the sort of tiredness with which the narrating fig tree thinks about us, human beings, and quite coldly registers our absurdity and our transience, compared to trees, has stuck with me while thinking about what to say today. Looking back on almost three years of heavy pandemic life, which has taken so much from us all, intellectually, socially, emotionally, in our families and communities and with the Russian war in Europe that presents itself in many forms in people’s lives in European cities, and with a humanitarian disaster not so far from here, there where the beautiful blue of the sea pretends tranquillity while it covers up that it is becoming a graveyard at the EU border – what to say about urban social futures?

We are all tired, aren’t we? In a recent special issue in CITY, David Madden flags the relationship between the ways we currently develop our cities and urban exhaustion, following up on an earlier article by Akwugo Emejulu and Leah Bassel who analysed the tiredness of women of colour activists both as a threat to their work and as a mechanism of solidarity, as the shared exhaustion signifies commonality. David Madden shows that urban exhaustion is also a ruling, where not only are workers, and I quote, “subsidizing the system with their own fatigue,” end of quote, and activists and volunteers are exhausted doing stuff that states should be doing, but according to Madden, powerful agents have interest in a general condition of fatigue, thereby maintaining the status quo by wearing down the opposition. Madden further notes that it is, and I quote again, “a challenge for critical scholars specifically to connect this overworked and unrested affective-embodied state with a politicised perspective on contemporary capitalism. We need to diagnose the system that’s causing us to lose sleep—and also use the experience of exhaustion as part of an effort to build solidarity with everyone experiencing exploitation and depletion.” The latter point is then what the collective ECA, Urban Early Career Academics, has been thinking about and working on, and deserves our attention. The experiences on which they draw, the multi-dimensional precarity of Early Career Academics, affected heavily by the COVID19 pandemic, produces a call for structures of academic solidarity that asks all of us to think about the roles we play in exhaustion as a ruling in neoliberal universities and in rethinking how we create a community of urban scholars. I urge you to read this piece, multiply its effect and share it widely. Especially because their piece makes clear that the potential of such initiatives requires the rethinking of academic hierarchies and the support of senior academics with secured positions. However, they, too, are tired.

Now one may of course immediately suggest that we should not be here in a face-to-face event that may suggest a ‘return to normal’. While the ecological disaster that we are in may make us guilty of contributing to climate change by taking a plane, but such guilt also helps to keep a system in place, and we should not think lightly about this, I also think that it is good that those of you who are here are here. For once, because it helps to feel, affectively and bodily, that someone listens. It is exhausting to say things, as academics, as activists, without a sense that anyone is listening. I think this too is part of the urban experience of exhaustion, as urbanites try to make things work for themselves and the people they care for in daily routines in crumbling urban institutions. In fieldwork I did years ago in a US housing complex, a mother and service sector worker, a woman of colour, was caught in an impossible triangle between landlord, school and employer. Social workers and teachers so often started with ‘Listen’ or ‘Now, you listen…’ when talking to rather than with her that I started to think about her exhaustion very much through the sense that nobody understood their position as one in which they could for once really try to listen to what she had to say.

Listening but especially sensing that someone listens is a lot easier offline. Thank you for making that exhausting trip or doing the tedious work of finding a way to pay your way here. As RC21 president, I am aware that many people are not here, and that one could suggest that a face-to-face conference is already a violation of the very idea of an inclusive and caring urban studies community for all the reasons well-known. There is no easy answer to this. Let me just say that I do not think RC21 should have one ‘normal’ in the normative sense of one right way to do things, or one way in which we always do things, but should always be in flux and in change, and reflexive.

It is clear that a face-to-face conference cannot be the only thing we do in urban studies, and of course it isn’t: nor is it just the RC21, as with IJURR, the IJURR Foundation and its scholarship programs, the Urban Studies Foundation, I name a few strong actors in the field of trying to make global conversation in urban studies possible and make more out of ‘decolonize’ than just a discourse. There is more to discuss, and more to talk about. The RC21 experimented with a doctorate school in a digital form rather than the face-to-face form we had in the past in connection to our conference. Other experiments may need to follow.

However, it is good to see your faces – even when masked. We will need to think about how we combine the strengths of various possibilities for urban scholarship that takes seriously the call for change and to fight exhaustion, both as a structural urban condition and as a feature of contemporary academia. But not to travel is not always an answer. As a sociologist interested in mechanisms of trust and encounter, I do think that the bodily presence of being near others continues to be a superior form of communication, as the listening takes on different qualities than it does on-line.

In our research at HU Berlin on the consequences of COVID19, we have seen that not having the casual, unplanned conversations that come with being in a place with others affects people, and digital communication has only replaced certain forms of this. A conference is not about presenting your work. A conference is about listening, thinking and then talking, and thank you, Marc Pradel, for starting me off on this train of thoughts. A conference is about the by-products: of the ideas and thoughts that we then and there produce together.

A tree knows that life is all about self-learning. So the fig tree says: “Under stress we make new combinations of DNA, new genetic variations. Not only stressed plants but also their offspring do this, even if they themselves may not have undergone any similar environmental or physical trauma. You might call it transgenerational memory. At the end of the day, we all remember for the same reason we try to forget: to survive in a world that neither understands nor values us” (p.100). But this is one of the many senses in which we are not trees. We can face the stress of this world through collective learning. We are not trees. We do not have to assume it is ordinary to self-learn and self-care. Exhaustion is an element of contemporary urban life: togetherness is a necessary condition to move away from the corner where we got ourselves. For togetherness, we need not only to present what we think, but to listen a lot. I hope you not exchange ideas as if this is a marketplace. I hope you will, to paraphrase Nick Theordore, not come to get a new idea and then have it but come to co-produce many new ideas. Urban futures with less exhaustion need that. Thank you.