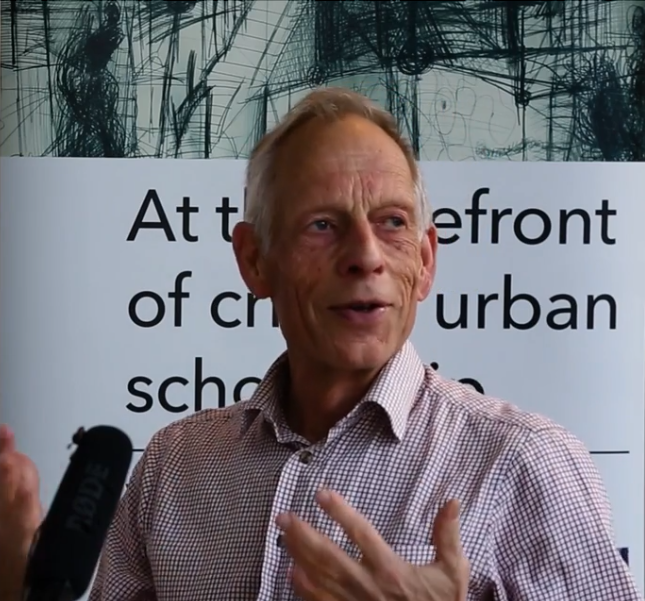 Chris Pickvance was no ordinary scholar. He joined the Board of RC21 in 1971-1974, and was RC21 Secretary in 1986-1990 and RC21 President in 1990-1994. He was a founding member (1977) of the editorial board of the International Journal of Urban and Regional Research, in which he held various editorial roles. He was subsequently a founding member (1990-2017) of the editorial board of the book series Studies in Urban and Social Change. He also contributed to the creation of the IJURR Foundation (previous called Foundation for Urban and Regional Studies, of which he was the former Chair of Trustees). Over the past decades he remained a pillar of the “RC21/IJURR” intellectual project. He shared his reflections on this trajectory on the occasion of the 40th anniversary of IJURR in a short video available here: https://www.ijurr.org/celebrating-40-years-ijurr/

Chris Pickvance initiated some of the most interesting urban comparisons in Europe. His classic paper on urban comparison (Pickvance 1986, 2001) remains a reference to date. As he spoke French, he played a crucial role in structuring the intellectual dialogue between British and French urban sociologists. His translations of key texts from the young generation of French urban scholars in the 1970s supported long lasting intellectual debates about, for instance, social movements. His conceptual work was very influential when he discussed French urban Marxists, including Manuel Castells’ work, which fed into his analysis of housing urban social movements. His book “State restructuring and local power: a comparative perspective”, jointly edited with Edmond Préteceille in 1991, bears witness to those long-lasting exchanges that fed into comparative research projects. In all the conferences and seminars that provided the intellectual impetus of RC21, Chris played a crucial role in discussing, translating and introducing different research ideas to different groups.

Chris Pickvance was a “grand monsieur” based at the University of Kent. His intellectual rigour was matched by his good humour, constructive criticisms and formidable empathy. He was well-known for his engagement with young researchers and for giving great advice on draft publications. His intellectual sharpness was proverbial. His detailed comments on numerous papers, theses or book manuscripts invariably included a mix of general points combined with a wealth of detailed comments about conceptual confusions, turns of phrases or the logic of the argument.

Chris was involved in many important collective urban research projects in the UK – for instance “Do localities matter” with John Urry and his great friend Michael Harloe. He was also a pioneer of urban research in Eastern Europe, through work that compared housing provision in Budapest and Moscow, or conceptualized post-socialist urban transformations.

A long-time major figure of RC21 conferences, he worked tirelessly for IJURR. Chris will be missed for his analytical and theoretical mind combined with an exquisite courtesy and generous spirit.  His intellectual and organizational legacy remains at the core of the RC21 /IJURR community.

Chris Pickvance, who has died after a short illness at the age of 77, played a pivotal role in the establishment of today’s global network of urban and regional research through the medium of the International Journal of Urban and Regional Research (IJURR) and the International Sociological Association Research Committee on the Sociology of Urban and Regional Development (RC21). His contribution over many years was both an intellectual and an organisational one.

Chris was born into a Quaker family, his parents were scientists and there was a strong intellectual, cultural, and international life in the household. All these values were reflected in Chris as a person and in his subsequent career. He was educated at a Quaker school in York and at the University of Manchester in what was probably the most distinguished sociology department in the UK at this time. He commenced work for a doctorate under the supervision of Clyde Mitchell but this remained uncompleted as his interests turned elsewhere.

After a brief period as a lecturer in Manchester Chris was appointed to a post at the University of Kent where he remained for the rest of his career, retiring reluctantly at the age of 67 as an Emeritus Professor of Urban Studies. At Kent he joined Ray Pahl, who was breathing new life into the largely neglected and frequently trivial corpus of British urban sociology, and a group of talented colleagues such as Ian Gordon and Nick Buck.

In 1976 Chris published Urban Sociology: Critical Essays, a pathbreaking work that had an immediate and widespread impact on urban research, notably in the UK and the USA. Since the late 1960s a new and radical, Marxist-inspired strand of urban social theory and research had developed in France (and as was later discovered in Italy too). Chris’s book introduced and translated key essays, by Castells, Lojkine and others, to a much wider international audience than hitherto. It directly inspired a wave of new theoretical and empirical work in the UK and beyond. It also helped crucially to shift urban research away from nationally confined frontiers towards the start of today’s global research community.

Through Ray Pahl’s networking and the intellectual stimulus from Chris’s book, there began a period of rapid growth of international exchanges centred on the ‘new urban sociology’ as it was then described, though it soon transcended this disciplinary label. There were two main developments which enabled the network to survive and grow. The first was RC21, founded mainly by French and Italian colleagues in the early 1970s but which expanded to engage English speaking colleagues from the mid-1970s. The second was the foundation of IJURR in 1977. Chris played a central role in both these developments, serving for many years on the Board of RC21, eventually as its Secretary and then President. He was also, along with me and Manuel Castells, one of the three founder editors of IJURR, serving first as its extremely effective Review Editor and later as the Editor of Events and Debates, over the first 20 years of the Journal’s existence. Chris was also involved in the establishment of the Foundation for Urban and Regional Research, which he later chaired, and was one of the original editors of the IJURR book series Studies in Urban and Social Change, with Ivan Szelenyi and John Walton, from 1990-2017.

Taken as a whole no one contributed more than Chris to the paradigm shift that occurred in the field of urban social research and to the subsequent establishment of today’s dynamic, international and continually developing network. Chris’s own work also made a distinguished contribution to the field, including his early work on urban social movements, his acute analyses of the methodology of comparative research, his work on protest, environmental regulation, deprivation and the Eastern European ‘transition’. It was while working in Hungary that he met his wife to be, Katy, a researcher at the Hungarian Academy of Social Sciences, and her two children. Together they formed a close-knit family and Chris delighted in his children and grandchildren. He was a devoted teacher at Kent and a highly successful doctoral supervisor. He also had a rich and varied life outside the academy, as a musician, a formidable gardener and in later years as a leading expert on mediaeval wood chests and early English furniture.

It was a privilege to work with Chris as I did over so many years. He was a modest and unassuming person, warm and friendly but with a strong commitment to intellectual rigour and to the advancement of urban research. He will be greatly missed.