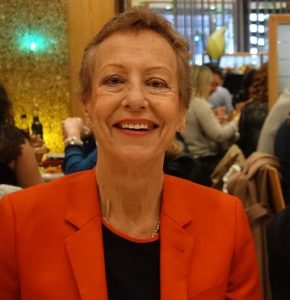 On September 21, Prof Dr Sophie Body-Gendrot, a long-standing member of RC21 and inspiring colleague, beloved friend and excellent teacher for many in the RC21 community, has passed away after an illness. We have asked Professor Enzo Mingione (University of Milano-Bicocca), Professor Marisol García (University of Barcelona), Adrian Favell  (University of Leeds), and Patrick Le Galès (Sciences Po) who knew Sophie Body-Gendrot for many years, to share their memories and appraisal of Sophie Body-Gendrot. With her passing away, we have lost a highly inspiring scholar, generous with support for younger scholars, and a strong influence in urban studies.

With the passing of Sophie Body-Gendrot we have lost a beloved friend. She was a strong personality whose warmth and intelligence never failed to light up seminars and conferences as well as social gatherings. She combined her personal charisma with an elegant sense of humour. To her young colleagues and students she gave encouragement to pursue knowledge and never cease to reflect; to her peers she gave intellectual stimulus and much food for thought. We miss her dearly but are fortunate to have known her and to be the beneficiaries of her legacy of a large production of books and articles.

Sophie was Emeritus Professor at the University Sorbonne-Paris IV, and researcher at the Centre for Sociological Research on Law and Penal Institutions (CESDIP), as well as an active member of RC21. She co-directed for nearly twenty years the “Centre de Recherche sur les Etudes Urbaines dans le Monde Anglophone”.

She raised important urban questions and her contribution to knowledge of cities has been widely recognised. Her work straddled sociology, criminology and political science. She wrote extensively about issues of security, urban violence, and the discrimination suffered by young migrants in European and American cities. Her life experience included teaching and doing research in several parts of the USA which prompted her continuous comparison between North-American and European cities. She based her analysis on wide research that tackled the motivations of the complex web of actors – from those involved in crime to the authorities and policymakers in charge of addressing security issues in cities. Her scholarship – widely cited – has greatly contributed to our understanding and knowledge of policies and of the urban challenges of increasing violence fuelled by social inequalities on both sides of the Atlantic. She has published and co-edited around twenty books and over a hundred articles. In 2012 Sophie analysed a wider range of urban realities in Globalization, fear and insecurity: the challenges for cities north and south. In 2014 she co-edited The Routledge Handbook of European Criminology. More recently, she published Public Disorder and Globalization and, together with Catherine Wihtol de Wenden, Policing the Inner City in France, Britain and the US. The participants in the Leeds International Conference of RC 21 in September 2017 were enlightened by her vivid opening speech on “The Authoritarian City”.

She was often selected by official French or international organizations as an expert. She was also the President of European Society of Criminology (ESC) and member of several committees. At the same time she was a regular contributor to programmes on French television dedicated to urban questions. In 2012 Sophie was awarded the French Legion d’ Honneur, the highest civil distinction that France has to offer.

Sophie’s smile and warmth will remain with us.

I met Sophie early on in my PhD research in Paris. She was extraordinary, not only in her kindness as a mentor, but also in taking seriously a young nobody foreigner whose comparative observations about French immigration politics and scholarship were at most politely smiled at by most of her colleagues. Well over 20 years later, I was proud that we were able, despite the difficult circumstances, to invite her to give a memorable keynote at the RC21 conference at Leeds.
Adrian Favell, University of Leeds
***
Sophie Body Gendrot was a long time enthusiastic member of RC 21 where she brought her  tremendous energy, generosity for younger colleagues together with intellectual curiosity,  a robust sense of humour and a permanent smile. Sophie, a professor at Paris IV university, was always an optimist about the US, about the energy of community organisations, the capacity for experimentation. She trained generations of students to think about cities, race, the police, the migrants, the urban periphery. She became an expert comparativist to discuss those themes in France and in the US, relentlessy criticising the race blindness of the French state, or French urban studies. Her main  book “the social control of cities” published in the SUSC series, became a classic to consider issues of urban violence. She was passionate about urban issues, about urban justice. Her brillant conversation was a treat to think about public policies, ethnic minorities, the police or violence on both side of the Atlantic. As a devoted expert in chocolate she was also well known and liked as a wonderful human being. She’ll be missed by the RC 21 community.
Patrick Le Galès, Sciences Po